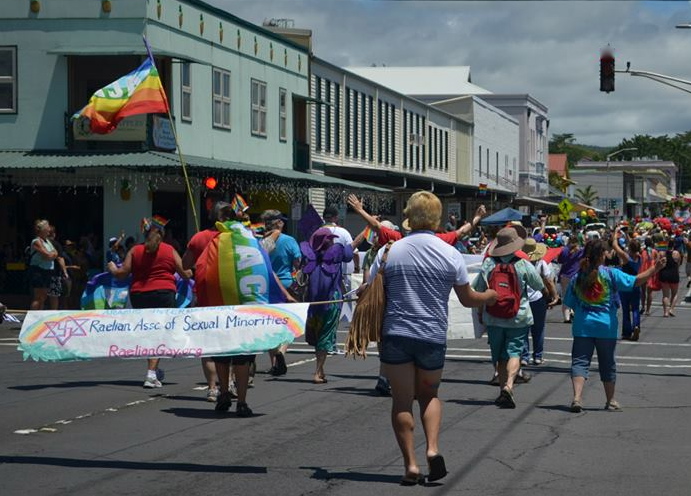 Many articles have been written about Thailand's unique trans-gender culture, and how Thai society lovingly embraces the 'third gender,'

But not much is known about a similar culture by the Hawaiian and Polynesian people, 'Mahu' is an affectionate name for men who has chosen to live as a woman.

In their true culture (pre-missionary) , such individuals were respected and regarded as important members of the community. It is still seen in present times, as Hawaiians maintain a graceful understanding of human beings, and how everyone possesses a complete Tao of male and female qualities within ourselves.

On July 6, something new hit our little island town... a wave of LOVE!
Yes, Hilo, Hawaii had their first annual Pride Parade.

Thousands of people dressed in rainbow colors and flags, came to watch the parade, not knowing exactly what to expect.
They traveled from all around Hawaii Island to support their gay, lesbian and transgender friends and family, and anyone who dared to openly express their sexuality.

As she arrived at the parade , Donna Grabow, the first raelian women entitled to celebrate same sex marriage, invited a young man dressed in drag, to join her in the parade, and together they carried the ARAMIS-International banner.

As they marched through town with a banner which read, 'ARAMIS INTERNATIONAL: the Raelian Association For Sexual Minorities,' many people along the sidewalks smiled and gave 'thumbs up' when they recognized the word 'Raelian' and the rainbow Infinity Symbol, which is the ARARMIS-International symbol.

The young Mahu who walked with Donna, shined like a star when his high school friends cheered and ran up to hug him. Then we passed his Hawaiian mom, who proclaimed, "That's my son! Come here baby!" They kissed, hugged and took pictures. Wow! So much LOVE !

The 'aloha spirit' is powerful and makes us so happy to be able to make changes in life, to be able to live among Rainbow people.

She will always remember the words of the late Raelian Guide, Kai Kalama who once said,
"The word "OAHU" in Hawaiian means, 'the Gathering Place.'
Hawaii is a spiritual gathering place for all the races and all the different people of the world."

« I feel so privileged to live among such a colorful and really human diversity. » declare Donna Grabow, raelian women and reprentative of Aramis-International.